Enrique Chagoya: From the Collections of Jordan D. Schnitzer and His Family Foundation
Through October 6, 2022
FREE and Open to the Public
Watch videos of Chagoya answering questions at the Opening Reception HERE.

We’re beyond delighted to be hosting a solo exhibit of work by one of the most important and exciting artists working today. 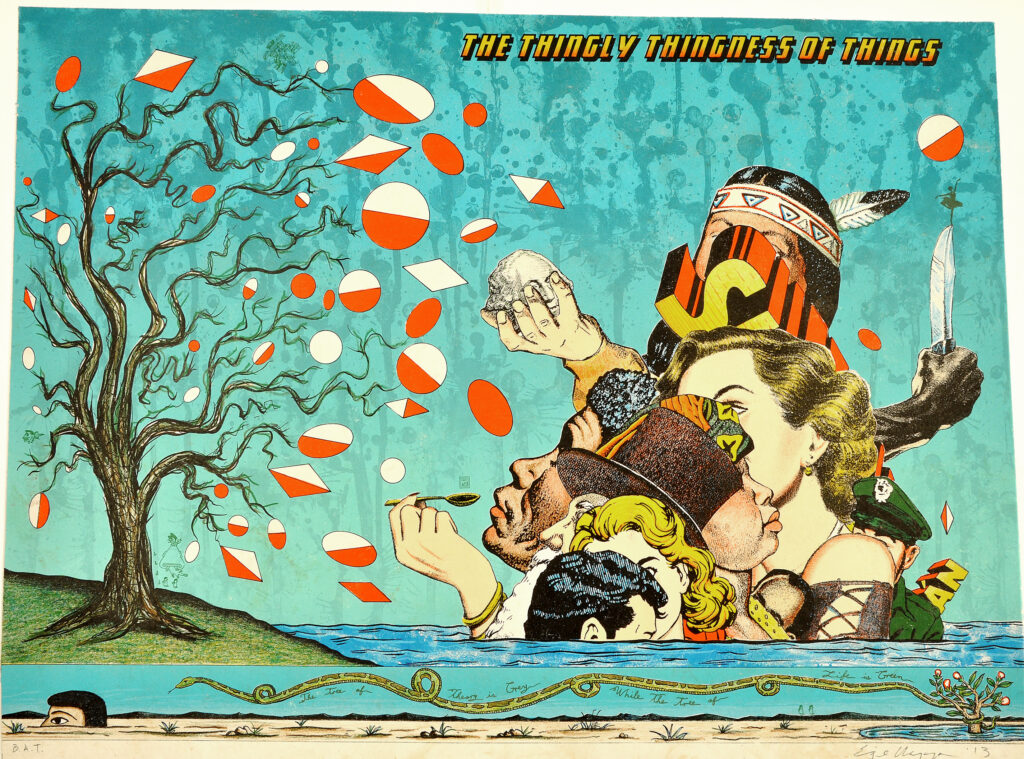 With the support of Jordan Schnitzer and His Family Foundation, the Pendleton Center for the Arts has carved out a reputation for punching above its weight when it comes to mounting major exhibitions in its East Oregonian Gallery. After four previous exhibits over the last five years that featured such art-world heavy hitters as Chuck Close, Louise Bourgeois, Ellsworth Kelly, and Kara Walker, the Center is getting ready to open perhaps its most ambitious showing; a solo exhibition of work by the acclaimed Mexican artist Enrique Chagoya. The exhibit opens on Friday, August 5 and runs through October 6, 2022. An Opening Reception on Friday, August 5 from 5:30-7:00 PM is free and open to the public. 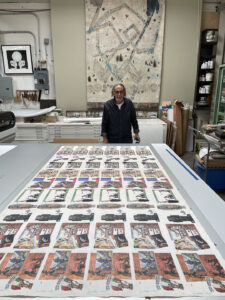 Enrique Chagoya is both an artist and a satirist. Born and raised in Mexico City, he studied political economics at Universidad Nacional Autónoma de México in the 1960s, and in the 1970s he moved to California to study at the San Francisco Art Institute. He received both his MA and MFA at the University of California, Berkeley. He is currently a full Professor at Stanford University’s department of Art and Art History and his work can be found in many public collections including the Museum of Modern Art in New York, the Metropolitan Museum of Art, the Whitney Museum of American Art, San Francisco Museum of Modern Art, and the Fine Arts Museums of San Francisco among others.

Chagoya uses familiar pop icons to create deceptively friendly points of entry for the discussion of complex issues. Because he is rooted in both American culture and Mexican culture, he’s able to move back and forth between the two, which informs his commentary on everything from history to current events. His work juxtaposes secular, popular, and religious symbols in order to address the ongoing cultural clash between the United States, Latin America and the rest of the world. He borrows from other artists, Marvel comics, prints by the European “Old Masters”, and other sources, removes images from their original context, then re-imagines them in combinations and juxtapositions that reveal absurdity, irony, and humor. His work is said to have the subtle and sophisticated ability to make people laugh and think at the same time.

Chagoya refers to drawing and printmaking as very humble mediums; he notes that they make him feel free. He’s made 100s of drawings and prints over the past 30 years, and began working in the book form in 1992, which was also the 500th anniversary of Christopher Columbus’s trip to the “New World.” Many of the works in the Pendleton exhibit are printed books in the style of the pre-Columbian Codex. Before colonization, Indigenous people throughout what is now Mexico and Central and South America created painted books that recorded history, science, land tenure, tribute, and sacred rituals using amate, a paper-like material, or prepared animal skins that were accordion-folded. Today only a handful of the thousands of books that existed before the Spanish conquest still exist. Some of the Chagoya books in the Pendleton exhibit stretch out to almost eight feet long when displayed.

The Pendleton Center for the Arts will have a series of demonstrations and hands-on workshops for youth and adults while the exhibit is on view. Guests will have opportunities to experience silk-screen and relief printing, make their own accordion books, and learn to make Amate. Dates and times will be posted at PendletonArts.org on Aug. 1, and all activities will be provided free, thanks to the generous support of the Jordan Schnitzer Family Foundation.

The Pendleton Center for the Arts is located in downtown Pendleton, 3.5 hours east of Portland on Interstate 84. The Center is housed in a historic Carnegie Library building on the banks of the Umatilla River. Extended hours will be available during the Chagoya exhibit, and private before-and-after-hours tours can be booked by emailing Roberta Lavadour at director@pendletonarts.org.

View some great videos of Enrique talking about his work HERE.

About Jordan D. Schnitzer and His Family Foundation 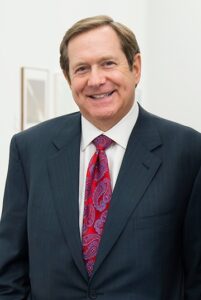 At age 14, Jordan D. Schnitzer bought his first work of art from his mother’s Portland, Oregon contemporary art gallery, evolving into a lifelong avocation as collector. He began collecting contemporary prints and multiples in earnest in 1988. Today, the collection has become one of the most important post-war and contemporary collections in all mediums, exceeding 20,000 objects and has grown to be the country’s largest private collection of prints. He generously lends work from his collection to qualified institutions with no additional fees. The Foundation has organized over 180 exhibitions and has had art exhibited at over 160 museums.

Drawing from his experiences living on both sides of the U.S.-Mexico border in the late 70’s, and also in Europe in the late 90’s, Enrique Chagoya juxtaposes secular, popular, and religious symbols in order to address the ongoing cultural clash between the United States, Latin America and the world as well. He uses familiar pop icons to create deceptively friendly points of entry for the discussion of complex issues. Through these seemingly harmless characters Chagoya examines the recurring subject of colonialism and oppression that continues to riddle contemporary American foreign policy.

Chagoya was born and raised in Mexico City. His father, a Banco de Mexico (the mint) employee by day and artist by night, encouraged his interest in art by teaching Chagoya color theory and how to sketch at a very early age. As a young adult, Chagoya enrolled in the Universidad Nacional Autónoma de México, where he studied political economy and contributed political cartoons to union newsletters. He relocated to Veracruz  and directed a team focused on rural-development projects, a time he describes as “an incredible growing experience…[that] made me form strong views on what was happening outside in the world.”[1] This growing political awareness would later surface in Chagoya’s art. At age 26, Chagoya moved to Berkeley, California and began working as a free-lance illustrator and graphic designer. Disheartened by what he considered to be the narrow political scope of economics programs in local colleges, Chagoya turned his interests to art. He enrolled in the San Francisco Art Institute, where he earned a BFA in printmaking in 1984. He then pursued his MA and MFA at the University of California, Berkeley, graduating in 1987.  In 2017 he received an Honorary Doctorate degree from the San Francisco Art Institute. He  was an artist in residency at Giverny gardens in France before moving to San Francisco in 1995. In 1999 he was an artist in residency at the Cité Internationale Des Arts in Paris. In 2000 he became a U.S. Citizen, but kept also his Mexican Citicenship.

Chagoya has been exhibitng his work nationally and internationally for over two decades with a major retrospective Borderlandia organized by the Des Moines Art Center in Iowa in 2007 that traveled to UC Berkelye Art Museum and to the Palms Spring Art Museum in 2008 ( fully illustrated bilingual catalog was published).

In 2013 his first major traveling survey in Europe (tri-lingual catalog in English-Spanish-Euskera was published) Palimpsesto Canibal/Cannibal Palimpsest was organized by ARTIUM Museum in the Basque Country (opened at ARTIUM in Vitoria-Gasteiz in the Fall of 2013 and at Centro Atlantico de Arte Moderno-CAAM in the Canary Islands in the Winter of 2015).

In 2015 a traveling print component from his retrospective Palimpsesto Canibal opened at Instituto de Artes Graficas de Oaxaca IAGO, and traveled to the Museo Nacional de la Estampa MUNAE in Mexico City in the winter of 2016. The same year he had a solo exhibition of paintings and works on paper Recent Work by Enrique Chagoya at Anglim Gilbert Gallery in San Francisco, California. In 2017 he was included in an exhibiton of American Pop art that opened in the winter at the British Museum in London, and in the fall he opened an survey of his prints at the McIninch Art Gallery at the Southern New Hampshire University.

In January 2018 he opened a survey of paintings, drawings and prints Aliens Sans Frontières at Marion Gallery at New York State University in Fredonia, NY, and in March an exhibition of new works Prints and Multiples by Enrique Chagoya at the Nevada Museum of Art in Reno, NV. In April opened a solo exhibition of Paintings and works on paper the George Adams Gallery in NYC.

In 2019 he had two solo exhibitions, Everyone is an Alienígeno at Florida Gulf Coast University Art Gallery, Fort Meyers, FL; Detention at the Border of Language Survey of prints, paintings drawings and multiples at the Coulter Gallery, Department of Art and Art History, Stanford University, Stanford, CA; He also was in a group exhibition Eye to I: Selfportraits From 1900 to Today at the Smithsonian National Portrait Gallery, through June 2019.

In 2020 he had two solo exhibitions, Detention at the Border of Language  at the Triton Museum in Santa Clara, CA, and The Seven Deadly Sins/Utopías Coloniales recent work done during shelter in place at Anglimh/Trimble Gallery in San Francisco, CA (October-December). A group exhibition (online due to Covid-19) (Re)Print: Five Print Projects at the International Print Center in New York, NY.

In 2021 he was included in the exhibition Printing the Revolution! At the Smithsonian Museum of American Art in Washington. In the fall he opened a survey of his codices and artists books Borderless at the California Palace of the Legion Art Museum in San Francisco, and a two person exhibition Double Trouble with artist Kara Maria, at the Sonoma Valley Museum of Art.

In 2022 an exhibiton of his codices Detention at the Border of Language opened at Edgewood College Gallery in Madison, WI. In the fall he is scheduled to have a solo exhibition at George Adams Gallery in New York, NY

A recent monograph “Alien”s was released in 2019, published by Kelly’s Cove in Berkeley, California.

He is currently Full Professor at Stanford University’s department of Art and Art History, and his work can be found in many public collections including the Museum of Modern Art in New York, the Metropolitan museum, the Whitney Museum of American Art, San Francisco Museum of Modern Art, and the Fine Arts Museums of San Francisco, Museo Nacional de la Estampa, Instituto de Artes Graficas de Oaxaca and Fundacion Televisa in Mexico, and ARTIUM Museum in Vitoria Gasteiz in Spain, among others. He has been recipient of numerous awards such as two NEA artists fellowships, one more from the National Academy of Arts and Letters in New York, residencies at Giverny and Cite Internationale des Arts in France, and a Tiffany Fellowship, an Honorary Doctorate from the San Francisco Art Institute in 2017, an induction to the National Academy of Design, and a Lifetime Achievement Award in Printmaking by the Southern Graphics Conference International in 2020, and a Guggenheim Fellowship in 2021.

Opening Receptions are typically on the first day of the exhibit—always FREE and open to everyone.

Through March 31, 2022
Nicole Pietrontoni : The Slow Current
in the East Oregonian Gallery

Ali Pope: A Fluid Mind
in the Lorenzen Gallery

Lyndee Dexter
in the Lorenzen Gallery

August 5 – Oct. 6, 2022
Enrique Chagoya: Selections from the Collection of Jordan D. Schnitzer and His Family Foundation
in the East Oregonian Gallery

Sarah German
in the Lorenzen Gallery

Marie Pratuch
in the Lorenzen Gallery
Information for artists who would like to be considered for inclusion HERE.

Are you
a member yet?

PCA Members recieve special benefits and provide for the success of an important community service.