The Pendleton Center for the Arts is located in the historic 1916 Carnegie Library building on the banks of the Umatilla River in downtown Pendleton, Oregon. This beautiful Italian Renaissance Revival style building was built with the support of self-educated millionaire industrialist Andrew Carnegie (1835 – 1919). Carnegie and the Carnegie Corporation provided funding for 1,681 public library buildings in 1,412 U.S. communities between 1889 and 1923. To Carnegie, libraries represented self education, so a library gift should represent self help. Carnegie provided the building but the communities provided the land and tax support for the libraries.

The Pendleton project was the result of the perseverance of a group of local women who envisioned that the building function as a gathering place. Architect Folger Johnson (1882-1970) of Portland modeled the entrance of the Umatilla County Library on the Pazzi Chapel at the Basilica di Santa Croce in Florence, Italy. The chapel was built over twenty years, beginning in 1442, and is attributed to the Italian architect Filippo Brunelleschi (1377-1446). It is often cited as an example of the perfect Renaissance building.

Crumbling walls, leaky pipes, and the cost of ADA accessibility and upgrading contributed to the relocation of the library in 1996. Unwilling to allow the beloved building to lie vacant, the Arts Council of Pendleton proposed a renovation to create a multi-venue arts center.

Pendleton is home to an amazing array of artists, writers, musicians and performers, and many of the cultural amenities we enjoy today can be traced back to a group of men and women who felt strongly about the importance of art and art-making. Betty Feves, Roberta Jones, Amy Bedford and Lorie Baxter are just a few of the movers and shakers who led the way, creating their own art, teaching others to make art and providing spaces for artists to display and sell their work.  After many years of informal activity, the Arts Council of Pendleton was officially registered with the State of Oregon as a nonprofit organization in 1974.

The organization organized art exhibits in various locations, supported individual artists with advocacy projects and offered art classes in a range of mediums. But, without a home base, the organization was limited in what it could do. 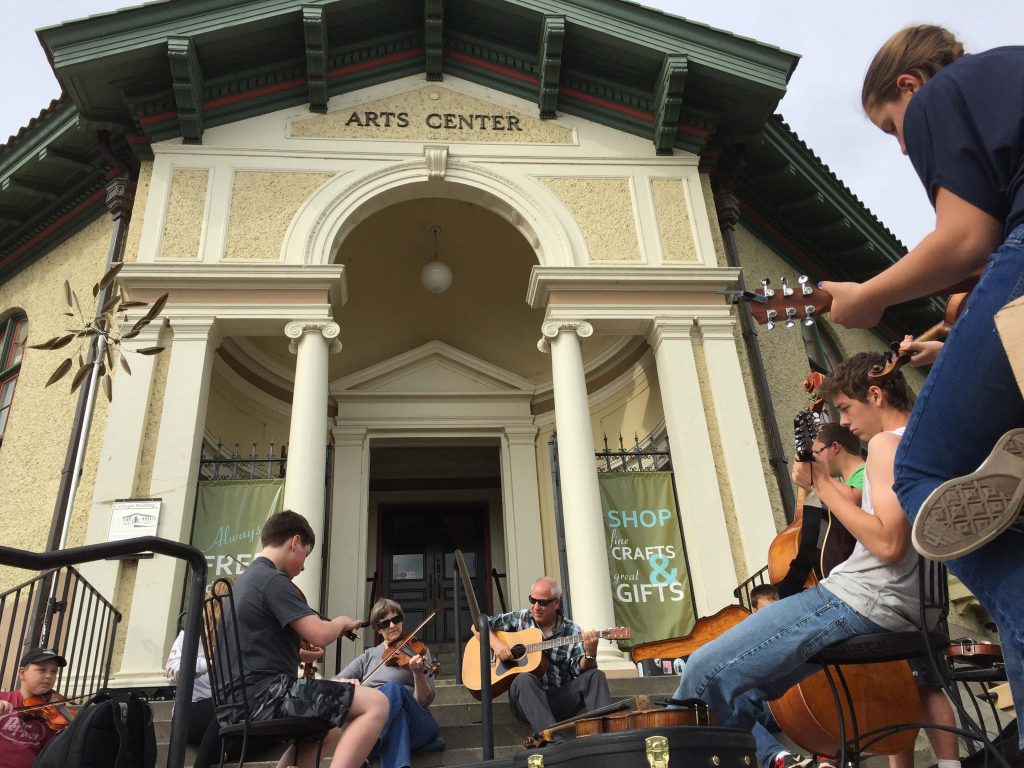 In the mid-1990s, the City of Pendleton contemplated what to do with the old Carnegie library building. Crumbling walls, leaky pipes and the cost of ADA accessibility and upgrading sealed the decision to move the library, and in 1996 the last books were moved to the renovated Helen McCune school building. Unwilling to allow the beloved Carnegie building to lie vacant, the Arts Council of Pendleton proposed a renovation to create a multi-venue arts center. The Arts Council was granted a thirty-year lease on the building by the City of Pendleton and the group got busy. Individuals, businesses and granting agencies contributed $1.8 million towards the project; renovation began in 1998 and was completed in January 2001.

Today, the building is once again an important gathering place for people of all ages in the community. And just as Carnegie infused our culture with the belief that access to books is an important public service, the Arts Center seeks to make access to art and art making a regular part of our day-to-day lives.

The history of the beautiful building is captured in a permanent display, thanks to the generous support of The Ford Family Foundation. Visitors can see images of the Pazzi Chapel in Florence, Italy, which served as the inspiration for the entryway, and catch a glimpse of Ruth, the amazing librarian who inspired stories of a haunted library.

Are you
a member yet?

PCA Members recieve special benefits and provide for the success of an important community service.